By J.D. O’Gara
Now that Davis Thayer has closed its doors, its 220 students will attend Helen Keller Elementary in the fall. The school held a farewell celebration on June 12th, which included a DJ, ice cream, a visit from “Pat the Patriot,” and even a specially written “Ode to Davis Thayer,” by local musician Jamie Barrett (https://www.youtube.com/watch?v=L3uC1EsoT6M ). 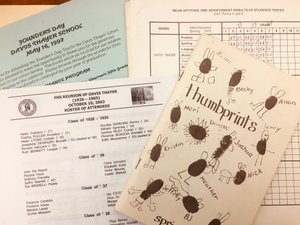 The celebration of Davis Thayer will continue this month, on July 15th, with a temporary exhibit created by Franklin Historical Museum Curator Rebecca Finnigan to be unveiled at the museum’s re-opening.

Finnigan explains that presenting exhibits of interest to Franklin residents is part of her mission to draw visitors to the museum.
“I’ve been trying to work with the Historical Commission to bring people in and remind them the museum exists. I try to find connections between the past and the present and to draw parallels between what’s happening now. I know people are well-connected to the school and have fond memories. Maybe they’ll see themselves in the exhibit, or maybe they’ll see their grandmother or another family member, and it will spark interest in history, which is really what we want, to have people come and see the history of the town they live in.”
Davis Thayer, who built the first straw hat factory in Franklin in 1810, originally owned the property where the school was built. In 1924, it opened as Franklin High School, and has served Franklin students for 97 years.
Finnigan explains that special rotating exhibits, such as the Davis Thayer exhibit, which will be up through the end of the summer, are a great way to showcase the wider collection the museum has. Photos displayed have been part of the museum’s collection.
“We’ll have photos of the school, a lot of class pictures, and we’re going to present sports uniforms that match up with the photos we have,” says Finnigan.
The museum is welcoming anyone with a specific memory they’d like to share to reach out on the Franklin Historical Museum Facebook page, or email [email protected]

The day’s celebration will also include the opening of a new permanent exhibit The Federal Parlor Room, from the Oliver Pond Home, generously donated by James C. Johnston in memory of his mother Clara J. Foss Johnston. Mr. Johnston will be an honored guest at the reopening. See what is happening in Franklin... Read More »
Arts and Education Franklin July 2021